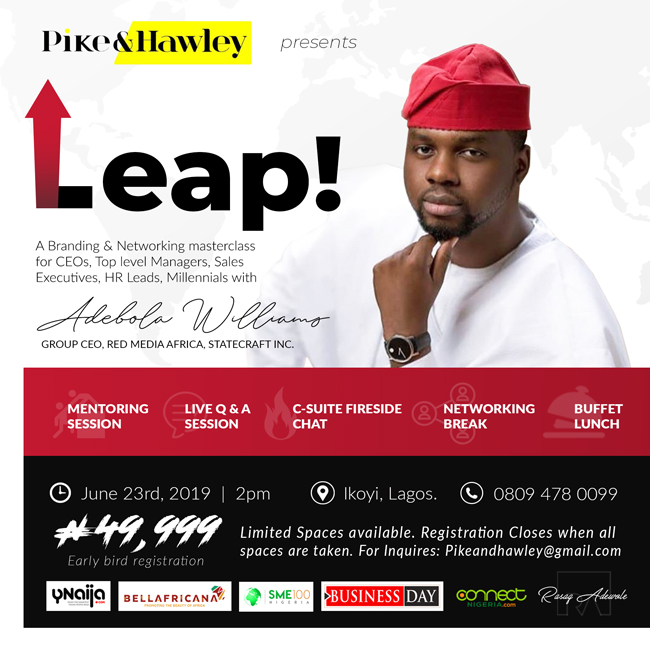 Adebola Williams will be present at the LEAP Masterclass, a branding and networking masterclass for CEOs, Top Level Managers, Sales Executives, HR Leads and Millenials.

Adebola Williams is the Group CEO of RED For Africa. A pioneer at the intersection of media, democracy and social change.
He co-founded and runs RED For Africa, Africa’s largest portfolio of youth media brands engaging the continent’s youth with leading brands like Red Media Africa, StateCraft Inc, The Future Awards Africa, YNaija.com, amongst others.
Popular for his work as a political strategist, he’s been profiled by Forbes and CNN as the man who helped elect a trifecta of three incumbent Presidents in Africa. In 2018 he was bestowed Marketing Edge Innovative Leader In PR and Image management award. .
Adebola’s work re-engineering society through youth development earned him the Mandela Washington Fellow and British Council global changemaker. .
He’s been named by Forbes as one of Africa’s best entrepreneurs under 30, recipient of the CNBC Young Business Leader of the Year award, in 2017 he was named The African Young Achiever by EMY Ghana and same year named by the as one of 100 Most Influential People of African Descent under the United Nations international decade for people of African descent. Also awarded an ArchBishop Desmond Tutu Fellowship in South Africa and Oxford Business School, in 2019 he was named Young Global Leader by the World Economic Forum. .
Adebola credits a big part of his success to his ability to network and connect opportunities. He’s also built one of the most formidable brands of this generation.

Lagos surpasses the Internal General Revenues (IGRs) of 29 other States