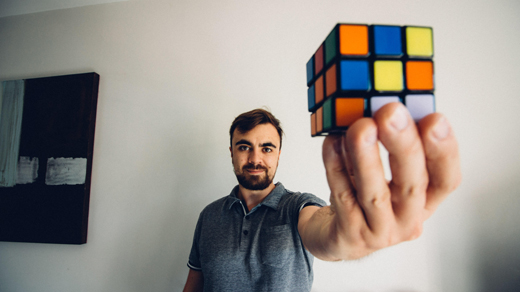 If you’ve ever hoped to master a skateboard/unicycle/backflip/Rubik’s cube/set of juggling balls, only to give up because you’re too darn busy/lazy/old/genetically challenged, Scottish YouTuber Mike Boyd is here to provide swift inspiration and/or strip away your measly excuses.

After hearing Malcolm Gladwell’s theory that you can learn any skill with 10,000 hours’ practice, the 26-year old from Dundee figured he’d give it a bash himself. Only he was in no mood to hang around.

The result is Boyd’s genius YouTube channel Learn Quick, which chronicles his supercharged efforts to conquer all manner of things against the clock.

Like spinning a basketball (4 hours 39 minutes), throwing a boomerang(2 hours), or a pool trickshot that’d impress John Virgo (3 hours 50 minutes). At the turn of 2017, Boyd compiled a year’s worth of freshly-learned talents into one flawless piece of footage. The damn show-off.

But fear not. Rather than present himself as a freak of quick comprehension, Mike Boyd is adamant that anyone, yes anyone, can learn things quick-sharp. Even you. And, helpfully, he has laid bare his biggest lessons here for AskMen.

“I’m not too keen on lessons or professional tuition, I like to jump in and do it all wrong from the start, by myself. For example, I recently learned the violin – I just picked it up and started.

“All my posture, my finger technique, the way I held the bow was, in an orthodox sense, wrong, but I deliberately didn’t get lessons. The key to learning something fast is to have enthusiasm, and lessons can sometimes sap enthusiasm. So what I try to do is get to the point where I’m enjoying it, and then consider lessons. Because once the bug’s set in, it’s effortless to learn.”

“I don’t buy any expensive stuff, I just buy like the second cheapest thing. Why? Because I don’t think [buying the best] helps you at all – it just costs money.

“By looking into the lens of the camera and saying, ‘I’m going to see how long it takes me to do this’, I create an incentive for myself. That concrete piece of footage really drives me, because it’s officially opening up the project. You’re no longer dabbling, you’re doing it, you’re committed. And even if you don’t do anything with that footage, just having it on your hard drive will really drive you. If not a camera, write it down or something.

“Also, the feeling of having started a project but not finishing it – nobody likes that. So the only way to get rid of that feeling is to finish what you set out to do.”

“Get the difficult, horrible part where you can’t do anything out of the way as quickly as you can – try and condense it to less than a week. Race to the part where you can start enjoying it, and then take your foot off the gas, because your enthusiasm will carry you the rest of the way. Then you’ll find yourself spinning a basketball when you’re sitting around the house watching TV.”

“Cristiano Ronaldo is a fantastic football player because of hard work, rather than pure genetics. Anyone can achieve what they want – we need to dissolve the idea that there’s people that ‘can’t do’ maths or physics. Hard work is really all you need.”

6. Don’t talk yourself out of it

“I understand that people have dreams as a kid, but then reality and bills and mortgages and getting married and having kids happen, so those dreams fade away. But I think the short-term learning of things I’ve achieved have proved you can be an accountant who is also a really good skateboarder at the weekend, and that’s totally cool. That way you can pay your bills, live in financial security and have fun.

“You can learn that stuff when you’re 25, 30 or 40. That barrier of age and job limiting what you can do is something I’m trying to break down.”

“My generation and the generation before really thinks failure is bad: you shouldn’t make an arse of yourself, [you should] be modest and do something that’s likely to succeed. Luckily, I think that mentality is fading away. I fail a lot on camera, and I sort of celebrate each one, because it just makes success all the sweeter.

“If people embraced failure more or were less scared of it, they would get an awful lot further. That’s what I try to do, and what I try to prove: that I am not superhuman, that failure is very much part of the game, and it happens to me an awful lot. I shy away from it as much as everyone else – it’s not a nice feeling – but if you can embrace failure, you’ll find a lot of people are cheering you on at the end.”

Should We All Be Copying Donald Trump’s Body Language?

What Is the Major Problem Faced by Entrepreneurs in Nigeria? ASK CHARLES