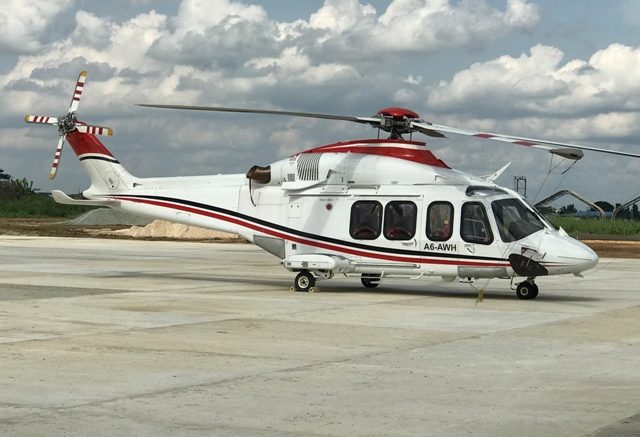 ADA’s 15 seater full offshore equipped helicopter AW-139 at OAS’ new Terminal NAFBASE Airport, Port Harcourt
United Arab Emirates helicopter company; Abu Dhabi Aviation (ADA), has completed moves to invest in Nigeria economy by joining forces with a Nigerian indigenous aircraft charter operator, OAS Helicopters.
The arrival of ADA’s 15 seater full offshore equipped helicopter AW-139 with registration number A6-AWH at OAS’ new Terminal NAFBASE Airport, Port Harcourt last week Thursday signaled the take off of ADA and OAS’ relationship, which had been undergoing technical and legal structuring since 2015.
The deal entails that Abu Dhabi Aviation will come with long years of successful oil and gas helicopter support experiences, which started back in 1976 and has developed to over 60 aircraft in active operation and over 1,000,000 flight hours supporting oil and gas exploration throughout the countries of the Middle East, Brazil, Spain, Indonesia, Australia and New Zealand.
Abu Dhabi Aviation’s AFB Contracts Manager, Kevin Den Hertog, who spoke on the deal said that ADA had always wanted to invest in Nigeria but had searched and waited to find a reliable and resilient partner, which eventually clicked with OAS’ history and ability to remain firm in operation for over ten years despite daunting challenges.
“With the level of implementation on the proposed business plan so far, we are quite confident that OAS and ADA partnership will enrich the Nigeria oil and gas aviation. Important to our success over the years has been an ever increasing engagement with strategic partners worldwide in the formation of healthy Joint Ventures that support oil and gas exploration in the deepest possible offshore with impeccable safety records,” he said.
Also speaking, the company’s Nigeria operations Lead Pilot, Capt. Westwood James added that ADA and OAS technical partnership was structurally designed to guarantee and deliver credible, safe and stable services in Nigeria oil and gas aviation and that they are here in Nigeria to drive the design to excellence.
On his part, the Managing Director and Chief Executive Officer, Capt Evarest Nnaji, said that the practical kick off of the partnership, which is landmarked by the arrival and the physical presence of ADA crew and equipment, is one investment step the Nigeria aviation will enjoy moving forward, especially in the area of oil and gas aircraft support services.
According to him, “We looked at ADA’s capacity to play at the highest echelons in the oil and gas aviation support, and their ability and willingness to build and transfer know-how in all the other international environments where they operate, and concluded that not only is ADA valuable to huge business profitability, but that they are equally reputable for reliable and consistent long term business relationship. Their safety record, volume of investment and ability to deliver excellent services even in the most difficult environment speaks for itself.”
Capt Nnaji said that OAS’ huge desire to provide services that meet the best possible international standard for Nigeria oil and gas aviation was the main driving force in the relationship with Abu Dhabi Aviation.

How to Forge Your Own Path in Business